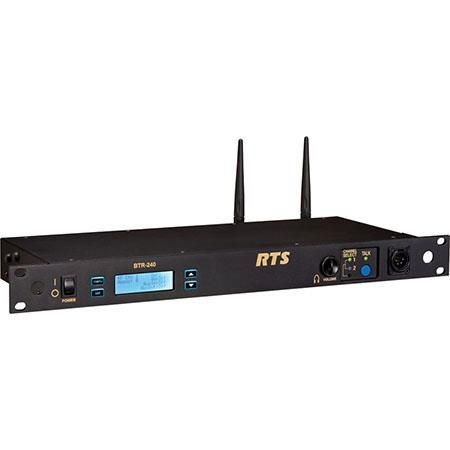 The RTS BTR-240 is a digital, multi-channel, wireless intercom system offering reliable and secure, full-duplex communications supporting up to eight (8) wireless TR-240 beltpacks and an almost unlimited number or half-duplex beltpacks. Operating in the 2.4GHz frequency band, the BTR-240 system uses the widely adopted IEEE 802.11 technology and is approved for license-free use in most countries. The system also incorporates the intelligence called ClearScan, which automatically selects the optimal RF (Radio Frequency) channel for communication.

The BTR-240 system has the ability to configure multi-level 802.1 1 wireless security features, such as data encryption and MAC address filtering, as well as 64-bit audio encryption to provide a highly secure wireless intercom system. The BTR-240 system offers two (2) audio channel operation, allowing users to select between two (2) individual audio channels of communication. The system permits users to talk and listen or listen only, to any individual audio channel or both channels simultaneously. The BTR-240 system is perfectly suited for standalone operation and can also interface with 2-wire systems including RTS, Audiocom and Clear-Com, as well as 4-wire intercom systems, such as the RTS Matrix system. In addition to the external intercom system interfaces, the system provides connectivity for auxiliary balanced audio input and output and speaker output.

The TR-240 beltpacks have the ability to be configured in one of three operating modes: wireless, wired or master wireless. In wireless (normal) mode, beltpacks communicate to each other using the base station as a relay. In wired mode, beltpacks turn off their wireless ability and communicate via Ethernet cable or through a building's existing Ethernet infrastructure. In master wireless mode, the beltpack acts as a mobile access point to provide wireless coverage for other beltpacks to communicate without an actual BTR-240 base station. The TR-240 beltpack has a removable lithium ion battery pack that provides up to eight (8) hours of uninterrupted operation. The battery pack can be charged directly in the case by plugging a power adapter into the beltpack or by placing the battery in the CHG-240 4-bay charger.