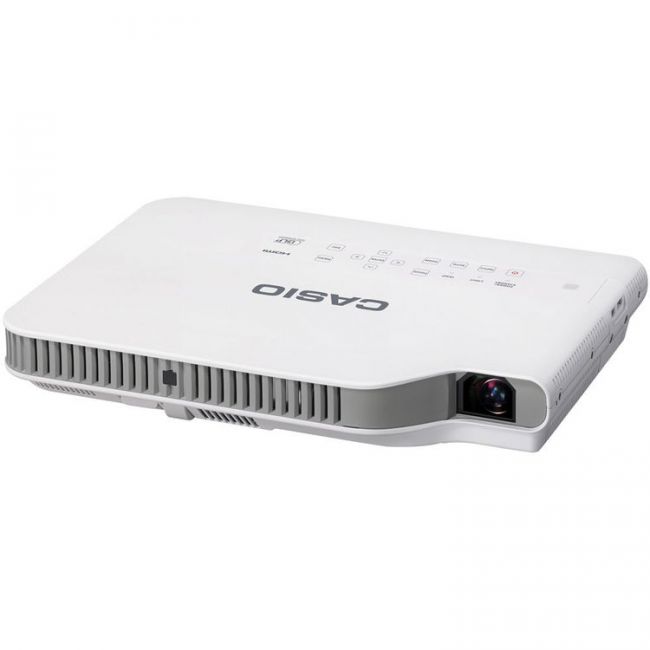 The XJ-A252 Slim Series 16:10 Multi-Media Projector from Casio puts emphasis on portability, with a thickness of 1.7" and an adaptable 2x optical zoom and 1.2 to 2.2:1 throw ratio. The projector is perhaps most notable for its hybrid LED/laser light source that is estimated to last up to 20,000 hours and boasts lower power consumption (165 watts maximum) than tungsten-based alternatives. The light source generates 3000 lumens at full brightness, and the single-chip DLP imager features native resolution of 1280 x 800 (WXGA) which translates to a 16:10 aspect ratio. In addition, it can adapt to non-native resolutions up to 1600 x 1200 (UXGA) for computer sources and 1920 x 1080 (Full HD) for HDTV video sources.

Combines the light produced by a laser array and an LED lamp to provide a light source that is more energy efficient than conventional projector lamps. It features a brightness of 3000 lumens in normal mode and a life up to 20,000 hours

Throw ratio is one of the most important characteristics of a projector - it tells you how wide the image will be at a given distance from the screen. Many portable projectors have 1.5x or less optical zoom, potentially forcing you to except a non-ideal image size when presenting in venues outside your control. With 2x optical zoom and a 1.2 to 2.2:1 throw ratio, the XJ-A252 gives you significantly greater flexibility compared to these projectors in terms of projection distance

The XJ-A252 is designed to give you a foot print that is similar to a laptop, and be not much thicker either. Including protrusions, the dimensions are 11.7 x 8.3 x 1.7. On top of that it weighs in at 5.1 pounds

Uses a combination of a 0.65" chip covered in millions of micro-mirrors and a color wheel to produce an image. DLP features less spacing between pixels and better contrast than many comparable LCD-based systems, and the design does not require a filter that needs to be replaced

This projector features a 16:10 native aspect ratio. This is considered a widescreen format, and comes very close to the 16:9 standard of HDTV. This format is ideal if you plan to show HD video, and can still be used for presentations - though in the case of PowerPoints some extra space may be leftover on the sides. The projector can show 4:3 too; however black bars (pillaring) will have to be applied, or the image will have to be stretched or cropped to fit