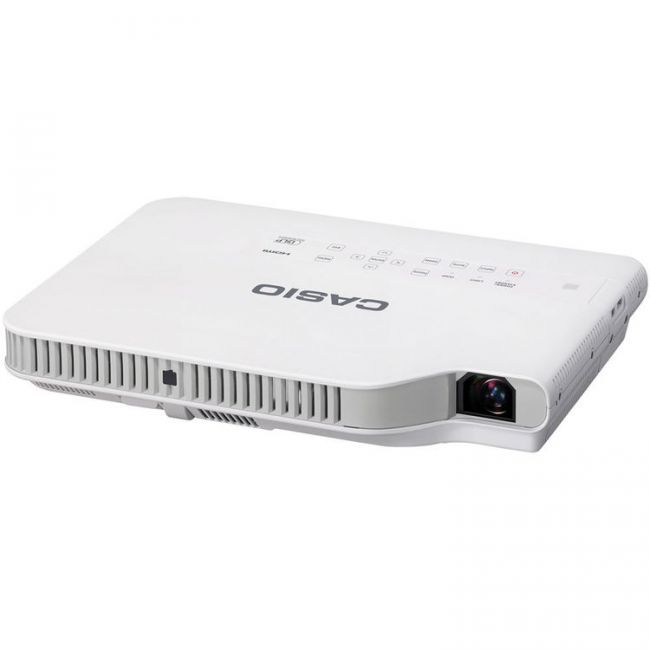 The XJ-A147 Slim Series 4:3 Multi-Media Projector with Wireless LAN Adapter from Casio puts emphasis on portability, with a thickness of 1.7" and an adaptable 2x optical zoom and 1.4 to 2.8:1 throw ratio. The projector is perhaps most notable for its hybrid LED/laser light source that is estimated to last up to 20,000 hours and boasts lower power consumption (155 watts maximum) than tungsten-based alternatives. The light source generates 2500 lumens at full brightness, and the single-chip DLP imager features native resolution of 1024 x 768 (XGA) which translates to a 4:3 aspect ratio. In addition, it can adapt to non-native resolutions up to 1600 x 1200 (UXGA) for computer sources and 1920 x 1080 (Full HD) for HDTV video sources.

For connection to a computer, Blu-ray or DVD player, A/V system, document camera, or just about any other video source, the XJ-A147 features an HDMI input, a VGA input, and a legacy composite input. The VGA input also supports component by using a separately available component (YCbCr/YPbPr) to VGA adapter or cable. A USB port allows you to connect a storage device such as a flash drive to give "PC-less" presentations or load files onto the 2GB of built-in memory. It also allows you to connected the included wePresent wireless LAN adapter. With this adapter you can give presentations from a Mac or Windows computer or iOS, Android, or Windows mobile device.

Throw ratio is one of the most important characteristics of a projector - it tells you how wide the image will be at a given distance from the screen. Many portable projectors have 1.5x or less optical zoom, potentially forcing you to except a non-ideal image size when presenting in venues outside your control. With 2x optical zoom and a 1.4 to 2.8:1 throw ratio, the XJ-A147 gives you significantly greater flexibility compared to these projectors in terms of projection distance

The XJ-A147 is designed to give you a foot print that is similar to a laptop, and be not much thicker either. Including protrusions, the dimensions are 11.7 x 8.3 x 1.7. On top of that it weighs in at 5.1 pounds

Uses a combination of a 0.55" chip covered in millions of micro-mirrors and a color wheel to produce an image. DLP features less spacing between pixels and better contrast than many comparable LCD-based systems, and the design does not require a filter that needs to be replaced

Using a USB flash drive, card reader, other USB storage device, or the 2GB internal memory you can give presentations or play video directly from the projector. File types supported include: PDF, JPEG, BMP, PNG, GIF, AVI, MOV, and MP4. In addition, PowerPoint files can be converted using EZ-Converter FA for Windows, available for download from the CASIO website

With the MobiShow app you beam presentations wirelessly from your smartphone or tablet. The app is compatible with iOS, Android, and Windows Mobile, and requires the device have a Wi-Fi interface so that an ad-hoc connection can be made with the projector's WLAN adapter

This projector features the XGA format, which produces a 4:3 aspect ratio picture optimal for PowerPoint presentations and many still images formats. The wider 16:9 HDTV and 16:10 computer aspect ratios can still be displayed - either by cropping the sides of the image, "letterboxing" (filling the remaining space with black bars top and bottom), or applying an anamorphic squeeze which distorts the picture