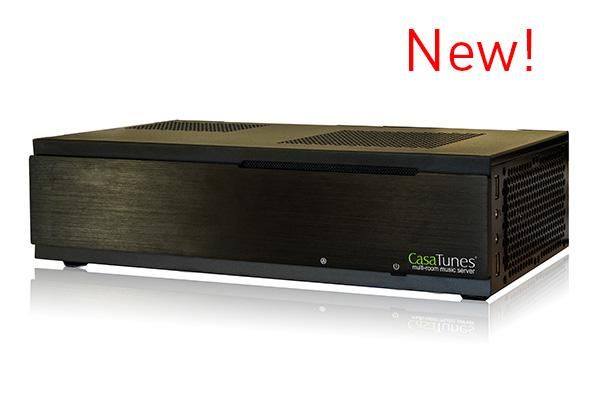 A COMPACT SYSTEM FOR SMALLER HOMES AND RETROFITS!

Does not include amplifiers or speakers. We recommendCasaTunes DTA-1, one per room.

The most flexible generation of CasaTunes Systems!
Wireless and wired in one system!

If you have three or less rooms wired for speakers, choose the CasaTunes CT-3 Music System. The CT-3 is capable of outputting high quality lossless stereo music in up to 3 wired rooms. Plus, the CT-3 will automatically detect and add wireless audio rooms using AirPlay®, speakers or other AirPlay devices. CasaTunes can easily add 5 additional wireless rooms for 8 total rooms! Complete the installation by adding amplifiers and speakers of your choice for your wired rooms and AirPlay speakers in your wireless rooms.

Suggestion: set the CT-3 on top of your multi-zone AV Receiver and use the AVR's amplifier to power two or three wired rooms. Place Pioneer AirPlay speakers in rooms that are not wired to easily add additional rooms.

Flexibility!
Wirelessly play music from multiple iPads, iPhones or iTunes through CasaTunes to your rooms!

With built in CasaTunes Air you can listen to music from your iPads, iPhones or iTunes running on Macs and PCs though CasaTunes to any combination of rooms or room groups, even to wired rooms Plus, the CT-3 Music System ships with three built-in streaming music sources, with each streaming music source capable of playing any combination of music from your iTunes located on your Mac®s or PCs, music stored in Windows Media Player, as well as music from an iPod, iPod touch or iPhone. Best of all, you can play music from the Pandora™, Grooveshark™, SiriusXM™, SHOUTcast™, Spotify™ and TuneIn™ Radio music services and many more.

Selecting your music has never been easier than it is with CasaTunes. You can select and play music and control your system from our apps on your iPhone/iPod touch and iPad or from your Android phone or tablet; you can use any supported web browser on any Mac, PC or Web device on your local network; and you can opt to install ourCasaTunes Keypads in each room.

The CT-3 comes pre-installed with 320GB of storage for Windows Media and iTunes lossless music.
All of your music plays back in high quality lossless CD format, even when playing through AirPlay speakers or other AirPlay devices.

All of our CasaTunes systems are upgradable to the latest CasaTunes software features. Even if you had bought our first XLi Music Server, you could upgrade it today to add the new wireless features included in CasaTunes Air! The gang here at CasaTunes will make every effort to keep up this tradition for all of our systems.

So, get started NOW!

Preloaded with our industry recognized CasaTunes Software; simply power up the music system, use our remote setup program, "CasaSetup", from any computer browser in the home to name your rooms and sources, and start enjoying all your favorite music throughout your home, all in just minutes!

Requires one pair of speakers and stereo amplifier for each wired room, AirPlay speakers or other AirPlay devices for wireless rooms.
Can be used with our CasaTunes Keypads.