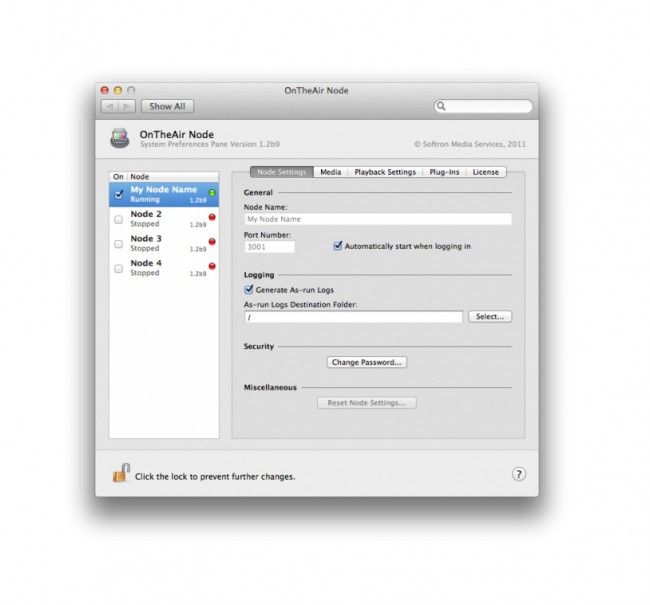 Client-server playout solution for the Mac

For live or 24/7 operations

OnTheAir Node has been designed to be an inexpensive, reliable and customisable video server that has an open client-server architecture. OnTheAir Node can be controlled remotely over the network. One client computer in a control room can control multiple OnTheAir Node playout servers located in the machine room.

With its unequaled openness, OnTheAir Node brings a new era to the world of Mac based playout servers. OnTheAir Node allows third party applications such as Traffic and Media Asset Management solutions to easily take control of a reliable playout server with real-time media cataloging and validation.

OnTheAir Node can also play different file types, such as QuickTime, MXF and transport stream (without an additional software) and even still images in png, tga, tiff, etc... It is also much flexible in terms of the audio formats that are supported (5.1 tracks for example).

All these files can be mixed within the same playlist, even using a different frame size. You will be able to choose an automatic resize mode (Fill, Pan-and-Scan, Letterbox), or decide a manual resize. The resize feature has been developed with quality in mind.

Combined with OnTheAir CG you can add Dynamic Graphics Overlay using the same video output (does not require an additional card thanks to the direct link between OnTheAir Node and OnTheAir CG).

And also, OnTheAir Node is the ideal solution for web-TVs on the Mac as it allows a direct connection with MovieStreamer HLS, in order to stream directly to the web without the need of an additional video card. MovieStreamer HLS will "just" receive the frames from the Smart playout engine and encode them in HTTP Live Streaming.

Playout multiple channels on one Mac
With OnTheAir Node unequaled efficiency, you can playout 4 streams of HD simultaneously on one Mac (even on one Mac mini!). OnTheAir Node's Smart Playout Engine is the same engine as OnTheAir Video. It can play multiple streams on one Mac (without Dynamic Graphics Overlay, and streaming options).
Media Management and Validation

OnTheAir Node will not only output video to any of the available video output on the Mac, and allow it to be controlled remotely, but it will also catalog the available assets in one or more scan folder and it will inform any of the client application (OnTheAir Live or OnTheAir Manager) when a new asset arrives or is deleted. It will also check for validity and compatibility. Information on the clips is provided as XML, making it easy for any other third party application to retrieve the clip's characteristics. (Ex: video codec, audio sample rate, creation date, last modification date, finder label etc.)

OnTheAir Node‚Äôs open architecture will allow any third party application as Traffic or Media Asset Management software to control the playout and see the list of available media. OnTheAir Node uses Telnet for its communications meaning that the protocol is a proven and open standard that doesn‚Äôt need any special requirements.

Send GPI triggers from OnTheAir Node to a video mixer or any GPI compatible device to take control of it thanks to our GPICommander box which connects in USB to your Mac and provides 24 inputs and 8 outputs of GPI.

You can also control video routers very easily. Blackmagic-Design Videohub and AJA Kumo routers have a dedicated plugin that connects through the Network to take control of the crosspoints. That is with this type of control that our users handle Live events in their 24/7 playout.

Thanks to its flexible system of "Attributes", OnTheAir Node can take control of multiple external devices such as video routers (through RS232 or Ethernet), Character Generators, logo inserters (using GPI triggers). Attributes are changed for the whole length of a clip and reverted back to the default value at the end.

The logic of Attributes make it very easy to handle in broadcast operations. Attributes always have a default value (such as logo on, or GPI on), and you decide to modify the default value only on the clips you want (set logo off for commercials for example).