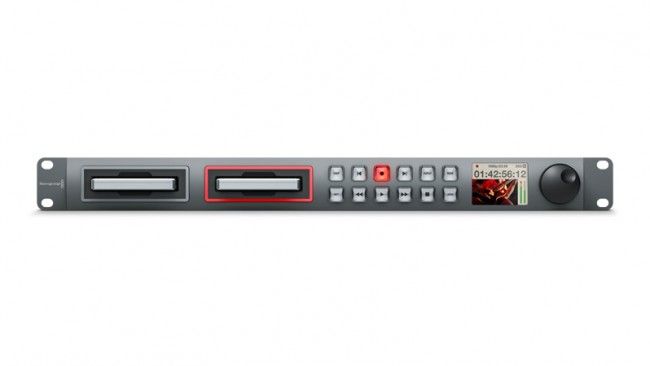 SKU
BMD_HYPERD/ST2
Be the first to review this product
$995.00
hidden

* Does not include any SSD drives

Compression destroys image quality. Now you’ll never compromise creativity because you can bypass the camera compression to get perfect uncompressed 10-bit SD/HD video. Create the sharpest VFX plates for match moving, compositing and more. Get deep dynamic color range for color correction and do perfect keying without jagged edges caused by compression, even on shots like hair and multi-colored patterns. Now quality will never limit your creativity again!

With SD/HD-SDI and HDMI inputs and outputs, HyperDeck Studio works with virtually every camera, deck or monitor! Effortlessly plug into monitors or televisions for instant on set preview. Use HyperDeck Studio as the video playback source for digital signage systems or switchers and as a fantastic replacement for a broadcast deck.

HyperDeck Studio is the tape deck for the 21st century! You get a user friendly VTR style design with control, knob for jog and shuttle, plus an external RS-422 control. The high resolution LCD screen displays timecode and transport information plus a full color thumbnail preview of the current clip in record and playback.

HyperDeck Studio improves nearly every step of your production workflow pipeline. For quick on set QC or client preview, connect SSD Recorder to a projector or television via the HDMI or SDI outputs. You can even edit directly from the SSD with no digitizing or file copying. Simply plug the SSD into your laptop or desktop via a standard eSATA dock!

Why be locked to using just one NLE or color grading system with a proprietary codec that could become obsolete at any time? HyperDeck Studio captures universally compatible uncompressed QuickTime files that can be used with all popular software packages like Final Cut Pro, Premiere Pro, After Effects, Resolve and Apple Color, both now and into the future. You’re always free to use the editing, color correction and finishing tools that you choose, and that are best for your clients and your jobs. That’s a true open format!

HyperDeck Studio uses two SSDs for perpetual recording that lets you record forever! If you run out of space on one disk, it automatically switches to the second disk with no manual intervention required. The first drive can then be conveniently replaced while recording, ready to take over again when the second disk is full. You can “hot plug” disks at any time without fear of lost media. For ultimate peace of mind, reliable frame-by-frame autosave ensures you won’t lose media, even if an active drive is accidentally pulled while recording!

At a single rack unit and less than 4 inches deep, you get a beautiful and solid design with an integrated LCD for playback status and video preview. Beautiful crystal look buttons give you full transport control.

You can rely on HyperDeck Studio to capture with frame accurate timecode. Enjoy the ultimate in flexibility with real time code options virtually the same as you remember from broadcast decks!

With no moving parts, SSDs are unbelievably robust and can easily handle shocks and vibrations that would destroy conventional hard drives or videotapes. SSDs are shock resistant up to an amazing 1500g. Thats like driving a car into a wall at 185 mph!